The two tournaments in Hawaii have concluded, with Zach Johnson and Jimmy Walker taking home the titles. Now, the PGA Tour opens up with the West-Coast swing for the next month and a half spanning California and Arizona.

The opening event on the West-Coast Swing in the Humana Challenge. The field for this event isn’t the strongest, but there are definitely some headlining players. There will be three courses that anchor the tournament, with the first 54 holes players tackling a different 18 per day. END_OF_DOCUMENT_TOKEN_TO_BE_REPLACED

Phil Mickelson won the tournament that no one (even himself) thought he could win, in 2013. Lefty’s victory at the British Open was huge on several levels. First, it took away the pain of losing the U.S. Open and recording a sixth runner-up finish at the event. Second, it brought Mickelson back to the forefront of the conversation as a champion rather than bridesmaid in Majors.

The 2013 PGA Tour season was a strong one for Mickelson. He won just two times (three less than Tiger), but the victories were significant. Heading into 2014 Mickelson appears ready to contend for Majors once again. END_OF_DOCUMENT_TOKEN_TO_BE_REPLACED

We’ve still got a bit of time until the 2014 portion of the new PGA Tour season gets underway. For this purpose, the focus will be on the No.1 player in the world Tiger Woods, and making a couple of predictions on where the direction of his season might go.

Let’s begin at the end, where Woods left off to close out last season. After taking the lead in the FedEx Cup Standings at the start of the playoffs, it was Henrik Stenson who captured the season-long championship. It was Woods however who won the 2013 PGA Tour Player of the Year. Woods won five times in 2013, including a World Golf Championships event. What was absent from the slew of victories was a Major Championship. END_OF_DOCUMENT_TOKEN_TO_BE_REPLACED

All of the tournaments for the 2013 season (both PGA and non-sanctioned events) have been completed. This past week saw the Franklin Templeton Shootout team competition in Naples, Florida take place – won by Matt Kuchar and Harris English.

Now, players will get roughly three weeks of before the start of the 2014 portion of the season. But for the first time, the start in Hawaii will not be the official beginning. The new season began this fall and will overlap on the calendar year – different from in season’s past. That means that FedEx Cup points standings will not be at even when players tee it up at the Hyundai Tournament of Champions on Friday, January 3rd from Kapalua. END_OF_DOCUMENT_TOKEN_TO_BE_REPLACED 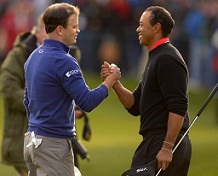 In the final individual stroke play tournament of the season (non-official) Tiger Woods and Zach Johnson were tied going into the final hole on Sunday. Woods began the day with a two-shot lead looking for his sixth World Challenge title (for which he is the host). END_OF_DOCUMENT_TOKEN_TO_BE_REPLACED

The next FedEx Cup event will be held in the second week of January 2014 in Hawaii for the Hyundai Tournament of Champions. END_OF_DOCUMENT_TOKEN_TO_BE_REPLACED