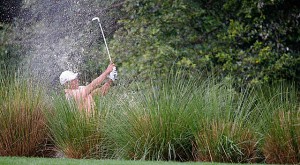 Play got underway at the 2013 Honda Classic on Thursday, the first stop of the four-tournament Florida swing coming up over the course of March.

PGA National proved to be a worthy opponent for the field during the first round, though some players were able to go pretty low.

It certainly was a different feel than the desert last week at the Accenture Match Play, with players contended with palm trees and water hazards instead of tumbleweeds and cactuses.

Tiger Woods had an adventure on the sixth hole on Thursday, putting his tee shot down in the water hazard, but was still able to play it. A few minutes after reaching his ball, Woods rolled up his pant, put on the rain suit, and hit a shot from the water. It was actually pretty solid contact, as Woods advanced it by about 60 yards. From there, he put his third up seven feet from the pin, and converted the putt for a par.

Woods finished the day with an even par round of 70.

As did Rory McIlroy, though he had the opportunity to post a number a few shots lowers. This is just his second tournament on the PGA Tour this season and the rust is still evident. And actually in fact this is his first stroke play event in 2013 for the PGA Tour, after exiting in the first round at the match play last week.

At the end of Day 1, it was a name we hadn’t heard from in a while who was at the top. Camilo Villegas eagled the par-5 18th hole, after hitting his second shot less than 10 feet from the flag. He knocked in the putt to post a 5-under par round of 65 to lead after the first 18, with a host of players just one shot back at 4-under.

That pack at 4-under includes names like Rickie Fowler, and Lee Westwood.

As the second round of the Honda Classic gets going on Friday, we can expect to see plenty more action from players trying to pull off miracle escape from the water, obviously highlighted by No.15, No.16, and No.17, collectively known as the ‘Bear Trap’.

The winds were relatively calm on Thursday, but can certainly pick up on Friday with a front expected to roll through.